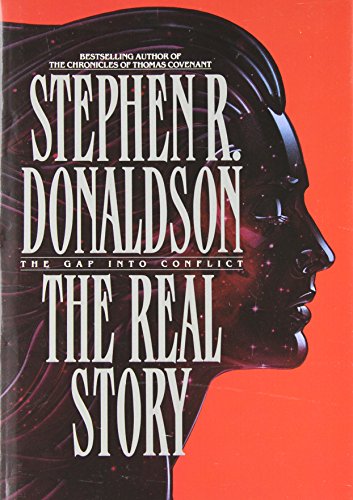 Author of The Chronicles Of Thomas Covenant, one of the most acclaimed fantasy series of all time, master storyteller Stephen R. Donaldson retums with this exciting and long-awaited new series that takes us into a stunningly imagined future to tell a timeless story of adventure and the implacable conflict of good and evil within each of us.

Angus Thermopyle was an ore pirate and a murderer; even the most disreputable asteroid pilots of Delta Sector stayed locked out of his way.  Those who didn’t ended up in the lockup–or dead.  But when Thermopyle arrived at Mallory’s Bar & Sleep with a gorgeous woman by his side the regulars had to take notice.  Her name was Morn Hyland, and she had been a police officer–until she met up with Thermopyle.

But one person in Mallorys Bar wasn’t intimidated.  Nick Succorso had his own reputation as a bold pirate and he had a sleek frigate fitted for deep space.  Everyone knew that Thermopyle and Succorso were on a collision course.  What nobody expected was how quickly it would be over–or how devastating victory would be.  It was common enough example of rivalry and revenge–or so everyone thought.  The REAL story was something entirely different.

In The Real Story, Stephen R. Donaldson takes us to a remarkably detailed world of faster-than-light travel, politics, betrayal, and a shadowy presence just outside our view to tell the fiercest, most profound story he has ever written.