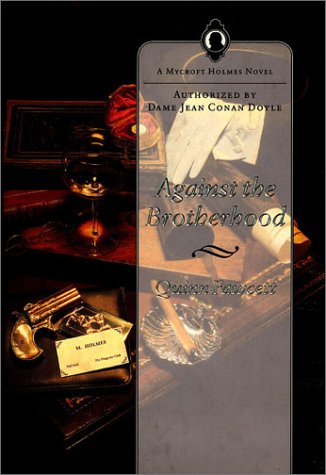 Acknowledged by Sherlock Holmes himself as the smarter brother, and gifted with even greater powers of observation than the famous consulting detective, Mycroft Holmes appears in only four stories in the Canon and remains an enigmatic figure wrapped in the mysteries of international politics and conspiracies.

Now, in Against the Brotherhood, we learn of Mycroft’s secrets throught the eyes of his new secretary, Patterson Guthrie. Guthrie’s upper-class education has not prepared him for the rough-and-tumble world of international politics, nor for his encounters with the beautiful and cunning Miss Gatspy, thief, spy, assassin–whatever the situation calls for. Mycroft is revealed to be a vigorous player at world politics and international skulduggery. Against the Brotherhood is full of attempted assassinations, secret spymasters, anarchist cabals, concealed identities, double- and triple-agents, burglary, and sabotage, all done in true Conan Doyle style.